The 2013 China international solar decathlon (SD) was held in datong, Shanxi Province.   Launched and sponsored by the US Department of Energy (doe), 22 teams from 35 universities in 13 countries competed in datong, a historic and cultural city, with a new solar green application technology called "solar house".

The SD competition aims to design, build and operate a fully functional, comfortable, livable and sustainable solar house by closely combining solar energy, energy conservation and architectural design in an integrated new way with the technology and creativity of the world's leading r&d and design teams. It is hoped that the competition will accelerate the integration and exchange of the solar energy industry and promote the innovation, development and commercialization of related technologies.

The competition asked each team to build a 60-100 square meter solar house during the competition,each of entering the competition solar homes is powered entirely by solar energy and meets daily living requirements: equipped with televisions, refrigerators, cooking stoves, dishwashers, washing machines,computers and other daily household appliances and furniture and other living facilities. The competition will comprehensively assess the energy saving, physical environment control and energy self-sufficiency of each entry, and determine the final ranking through ten individual event appraisal, so it is called the "decathlon" competition.

In this competition, Foshan AnMeiJie Light Steel House Co., Ltd. provided a lot of technical support to students of Tel Aviv University and shenkar college of engineering and design.AnMeiJie uses years of building experience and technology to bring the students' concept tocome true. In the competition, Israel's 4E House, which was built with great efforts, won the second place in the subjective competition award -- architectural design category, and the objective competition award -- hot water supply and energy balance. Let's take a closer look at the works. 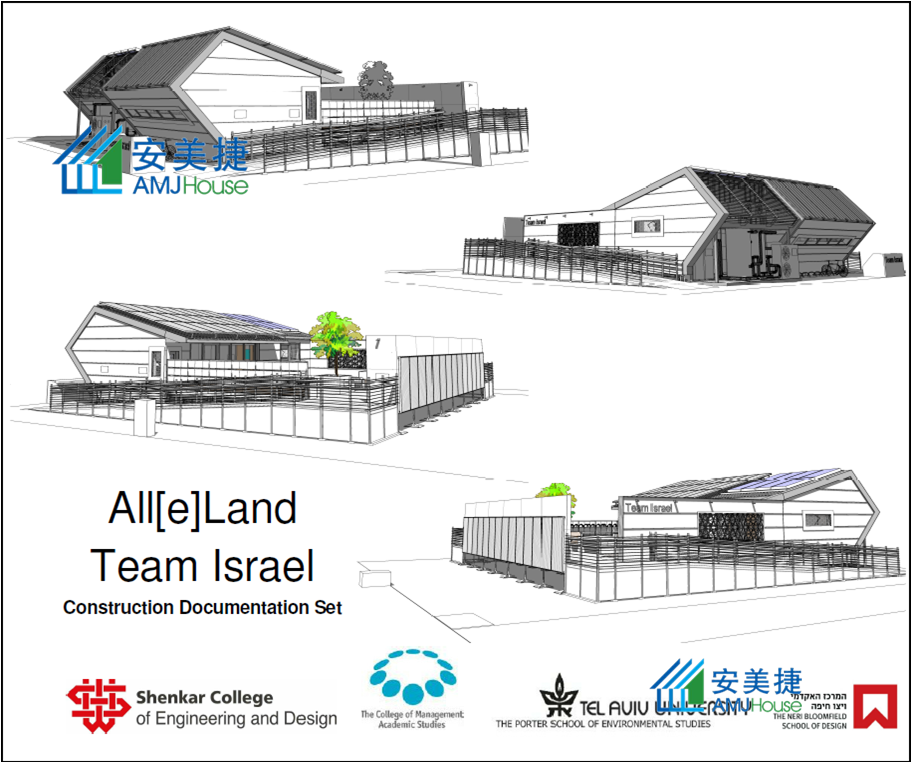 Israrl 4E House is a off-white color steel structure full of exotic flavor, with a unique appearance.The walls are inlaid with irregular geometric patterns, and the spacious courtyard is decorated with black steel ornaments of different shapes. The green walls looks very chic and unique due to the walls are surrounded by green onions, peppers and various ornamental plants that grown in plant bags.

In order to speed up the construction and avoid the chance of mistakes, AnMeiJie prefabricated it in the factory and then shipped it to the competition site, the palace of the sun, for assembly. （Unloading at the site） （Installation of framework and walkway） （Paving board on the ground） The interior design is also full of creativity, making full use of the spatial layout, appear transparent and open. The kitchen is open type, the house does not have flowerpot, there was a small pond with flowers not far from the pot ,can adorn the kitchen already, irrigate rise very convenient also.The windowsill of the sitting room is very special, the windowsill of two stories can sit a person, after the cover board of windowsill is lifted inside can put thing, already practical fresh.In addition to this high-low  box furniture is mutifunctional, sofa unfurl also can become a bed, these changeful furniture saves a space already, can adapt the need of family population growth again. The colour of whole room downy quietly elegant, made the same grade to the bedroom added family atmosphere, give a person the feeling of a kind of pure and fresh nature, contracted atmosphere. "Israel 4E House" sunny house design concept is a modern interpretation of traditional architecture.In Israel, where the weather is hot, traditional Israeli homes have a spacious courtyard with a landscaped terrace where the master can eat and party with guests.The sunny house is low in energy consumption, and the overall energy consumption is minimized through the use of thermal maintenance structures and energy-efficient appliances.For example, the air conditioning system, is through the water cycle to regulate the indoor temperature and humidity, and the entire air conditioning is not power consumption. AnMeiJie assisted the students to participate in the competition, enabling them to realize many cutting-edge, advanced and experimental projects in the real house construction process, which greatly promoted the professional ability of college students. Also let the steel structure house in the world to get greater promotion.